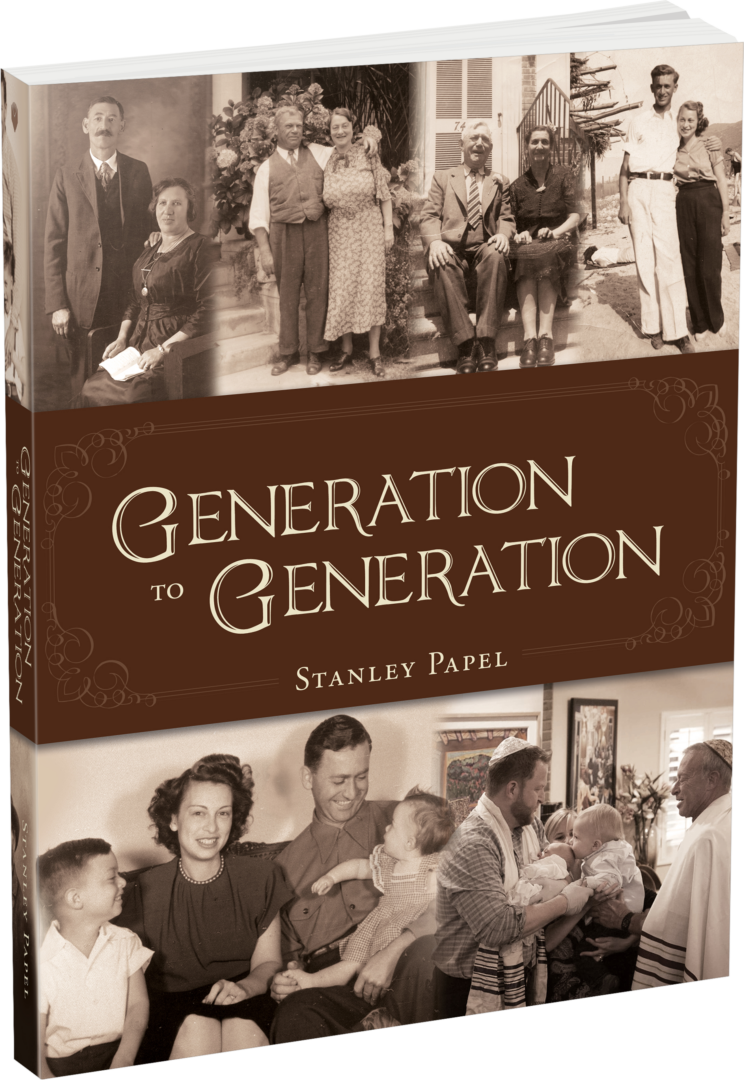 Generation to Generation traces the compelling story of a contemporary Jewish-American family from its origins in Hungary and Lithuania, through immigration in the late nineteenth and early twentieth centuries to the United States, South Africa, and Mexico, to the present time. Although it covers six generations, its history is relayed mostly through the personal voices of Stanley Papel and his parents, Phil Papel and Sophie Roth Papel. Not only a memoir, Generation to Generation offers insight into the giftware industry, middle-class life in twentieth-century Los Angeles, and the emergence of a gay sensibility from a traditional family milieu.

The book may be purchased in paperback, hardback and electronic versions at Amazon.com; then search: Generation to Generation by Stanley Papel. The options will show pricing and worldwide distribution options with free shipping to Amazon Prime members. The book is Coffee Table size measuring 8.5” x 11” with 200 pages including approximately 100 photos and ancestry charts. Official Publication date was October 1, 2020. An revised 2nd edition is planned for 2022.

Book seller orders can be placed through Ingram Content Group. The publisher is Ingram Press.

Stanley spent his career of over 50 years in the giftware industry, creating new products with a large international distribution. Since retiring, Stanley has been writing about his family and his family’s business. His first book, Tales Beyond Main Street, is a history of the Papel family business, which started in Disneyland, California in 1955. This book, Generations to Generations, covers the story of his family from its European roots to the present.

Stanley is the father of three grown children and several grandchildren and was recently married in a same-sex ceremony to Sven Wulf. He spends the majority of his time in Palm Springs and Los Angeles. 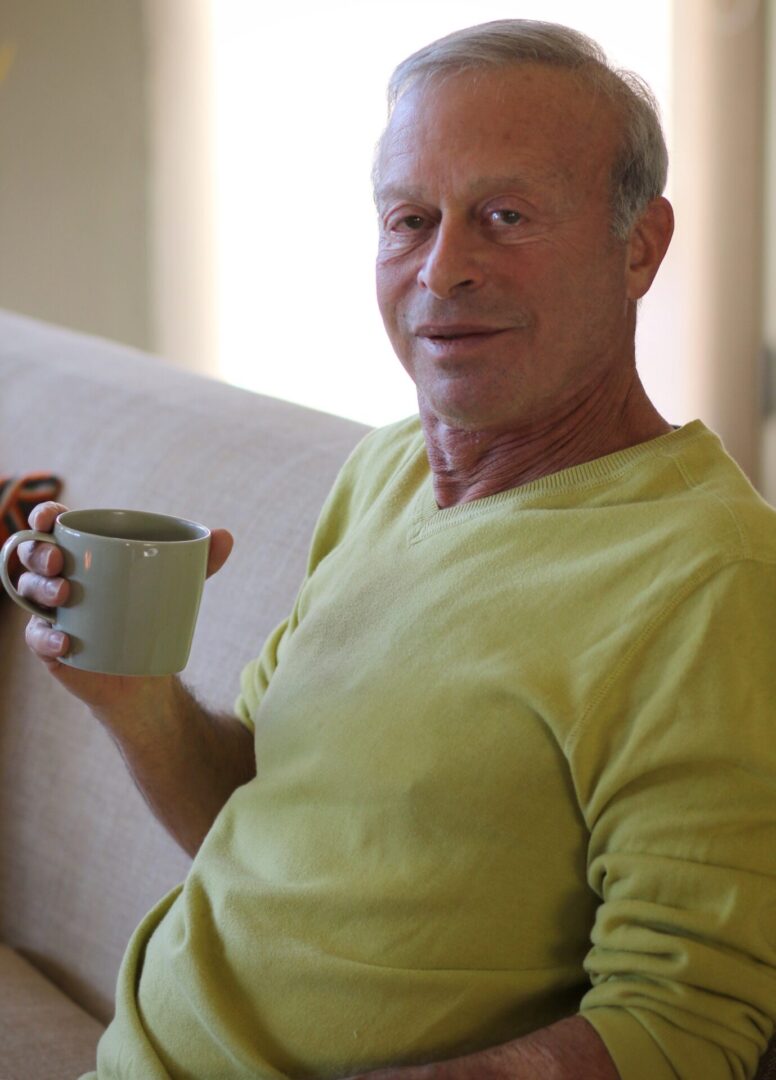 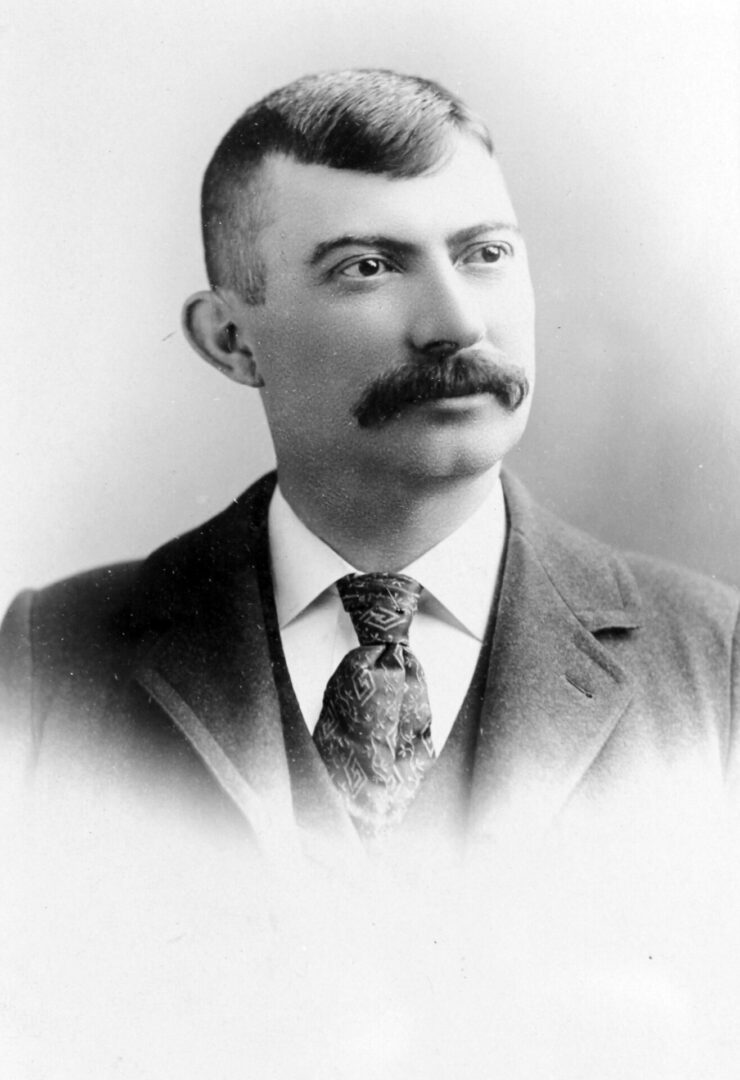 When I was about 10 years old, I asked my Grandma Effie to tell me about her parents - Sophia, whom my mom was named after, and Louis, whom I was named after as Stanley Louis Papel. After telling me many wonderful things about my great grandmother Sophia, all Grandma Effie said about my great grandfather Louis was, “I really don’t remember much about him, but I know he was a gambler and a drunk.” It always bothered me that she remembered hardly anything about her father and what she did know was very negative.

About 45 years later, in 1996, I was putting up a wall of family photos at my home in West Hollywood, and my eyes locked onto Louis Fisch’s photo. As I looked, he seemed to be saying to me, “I was NOT a gambler and a drunk.” He had the same eyes as me, and it was as if I saw myself in him. Then I had a troubling thought. “When my great grandchildren ask about me someday, it’s possible that my grandchildren might say something like, “I really don’t remember much about him, but I know that he divorced his wife because he was gay.”

In other words, I would be identified by some things that don’t fully recognize me for who I am. Maybe Great Grandfather Louis may have gambled and liked to drink, but there was a lot more to him than those two negative characteristics. It’s the same with me and with everyone. We should not reduce people to labels and think that we know them.

For example, cousin Geri Roth Jacobson mentioned that Louis had written many letters to his daughters, which were kept in an old trunk - a trunk that was passed over the years from family to family. When I asked Geri if she could retrieve the letters, she said she had heard that they had been burned. Why that happened is a mystery, but I believe that the letters would have revealed Louis to have been a far more complex person than my grandmother’s description: a kind man who loved his daughters.

As the years pass, I have looked at his photo several times, and I keep hearing in my mind, “I am a lot more than a gambler and a drunk.”

One of the incentives for me to write this book is to show that there is much more to people - including those in our family - than the simplistic labels we apply to them. I don’t have any great grandchildren yet, but if they read this book, they will know that there was much more to me than my sexual orientation, which is a small part of who I am.

“Who am I?” is a question we all ask ourselves during our lifetimes. Perhaps by understanding our parents’ and grandparents’ lives, we might find a partial answer to this question. This book is an attempt to write about my life, and the lives of my parents, their parents and grandparents. Whatever I can obtain of our family history I will try to include, as I know this information will someday be meaningful to future generations of our family.

I don’t consider my own life story to be overly exciting. I am somewhat of a private and introverted person; therefore, it will take some courage to be open about some of the thoughts and experiences that I have kept to myself. The other personal stories here may also be uncomfortable to read or very personal, but it’s important for these things to be revealed so we can appreciate our family history in its entirety and know who we are.

I think of what is written on my father’s gravestone: “As long as we live, he too shall live.” Similarly, as long as future generations read and add to this family history, the people in it will continue to live.

“Always fascinating and consistently entertaining, Stan Papel’s wonderful autography has a laid-back charm and candid sense of humor that fuels a massive amount of memories, including those of his mother, father, and other members of his family. We get detailed insight into what it was like to grow up in Los Angeles in the 1940s and 1950s. Particularly fascinating is Papel’s description of his dad’s growth as an entrepreneur from early pioneer in the giftware business and his success in opening one of the first retail gift stores on Disneyland’s Main Street to the multi-million dollar expansion that Stan helped create and develop.

Though this book may have been written mainly for family and friends, it offers other readers a fascinating and endearing glimpse at the numerous challenges of juggling business, family, children, wife - eventually ex-wife. His insights include an unusually honest assessment of what it was like to struggle with sexual identity, describing in some detail his coming out experience when he was in his 50s. I highly recommend this book.”

Gary Seigel is the author of the new novel from Acorn Press, Haskell Himself. His non-fiction book, The Mouth Trap: Strategies, Tips, and Secrets for Keeping your Feet out of your Mouth, published in 2008 by Career Press, has been translated into a dozen languages.

“Touching, truly interesting, and well written. Your love of your family is palpable, your challenges around "coming out" honest and not sugar-coated, and your commitment to business success as an engine that drove you both admirable and moving, though you're candid about the cost of success to other areas of your life and well-being. Not to mention that your life story is a virtual ‘primer’ on the giftware business.”

Mark Gauthier is the President of The Foundation for The Palm Springs Unified School District. After a long career as a Madison Avenue advertising and promotion copywriter, with positions on the editorial, advertising, and business sides of Foreign Affairs, Forbes, and TIME Magazines (1980s), he began working independently in New York as a corporate and marketing writer in publishing, media, pharmaceuticals, technology, packaged-goods, automotive, B2B, education, upscale real estate, and other categories.

ALPHABETICAL LISTING OF NAMES IN GENERATION TO GENERATION